The extensive component part comprises three formerly independent ore mining districts centred on the mining towns of Abertamy (including the mining settlement of Hřebečná), Boží Dar and Horní Blatná in the highest, western part of the Ore Mountains. The major part of the component part is located on the slightly undulating upland plateau ca. 1,000 m above sea level; the highest elevation is situated 1,115 m above sea level.

Apart from the three small towns, the landscape is only sparsely populated and mostly overgrown by forests. The Abertamy – Boží Dar – Horní Blatná component part represents a large relict mining landscape providing outstanding evidence of the extraction of tin, iron and other ores from the 16th to the 20th centuries. In particular, the Horní Blatná and Hřebečná ore mining districts with their numerous aboveground and underground remains document the methods of tin ore mining from steep greisen veins over the course of 400 years. Representing a completely different type of ore deposits, the Zlatý Kopec – Kaff mining district provides exceptional evidence of extracting polymetallic ores from hard skarn rocks.

Vast tin placers near Boží Dar are witness to the huge extent of cassiterite panning in the highest parts of the Ore Mountains at least from the 16th century.

The still functional Blatenský vodní příkop (Horní Blatná water ditch) is a masterwork that documents the high standard of mining water management in the 16th century.

Horní Blatná is an outstanding example of a 16th century Renaissance mining town which was founded well-planned on the “green-field site” as a consequence of rich tin ore discoveries. Contrary to a number of mining towns which were founded close to silver ore deposits, Horní Blatná is the only example of a planned town which owes its existence to deposits of tin ore.

The Hřebečná mining district is an exceptional witness to 400 ye...

Horní Blatná is an outstanding example of a 16th century Renaissance mining t...

In the vicinity of Horní Blatná, a number of tin and iron mines operated from...

On the Kaffenberg hill north of the Zlatý Kopec settlement, polymetallic Fe-Z...

In the valley of the Hrazený potok (creek) south of Zlatý Kopec, tin ore was ... 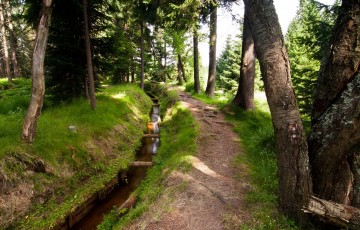 Members of the Montanregion in the Czech Republic